I have been a slacker with the blogging lately. We've just been busy and not home. Okay, excuses aside, we went on our first even family vacation a few weeks back. It was fun, but no one told me that vacation with a baby was so tiring! :) We rented a cottage near (across the street) from Lake Michigan in a town called Leland, MI. We had been there before, visiting friends, and decided that it would make a good place to go with Parker on her first vacation. The first few days were really nice, so we spent a lot of time at the beach. 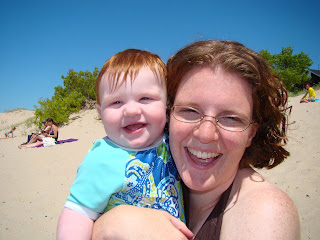 Parker was very unsure about sand in the beginning. The first night we were there, we took her to a small beach (not really suitable for swimming or lounging in the sand, but perfect for sitting and watching the water). She despised the sand. She would fuss or cry every time her little feet touched it. We were a little worried and thought we might be in for a long week!

However, we tried the real beach the next afternoon and apparently all a baby needs to get over her fear of sand is a few toys and a bathing suit. She loved it. She was not so sure about the actual water however. She kept pointing at it, and liked to be held while one of us was standing in it, but didn't really want to get in herself. One day, she got distracted by some rocks and sat in it a little, but we mostly played in the sand. 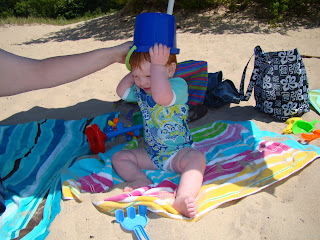 We spent the evenings lounging in the yard. We found a supercute, tiny chair for Parker and she thought it was hilarious to sit with her Moms. 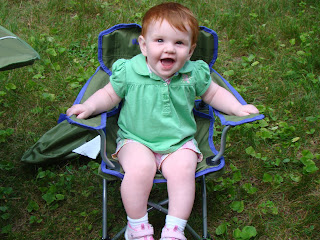 A week or so before vacation, Parker had started saying "whoa" when something interested her. I finally was able to catch that face on film...errrr....pixels? 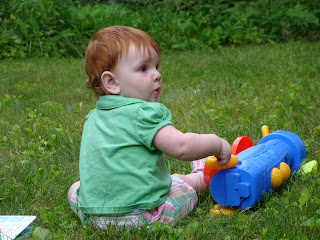 The last couple of days were a little chilly, so we made a trip to visit the Grand Traverse lighthouse (I think that's what it was called.......) Anyway, here's Alicia and Parker by the Lake at the lighthouse. 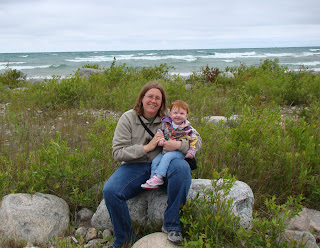 Overally, a successful first vacation. We had fun. It was nice to be away from reality for a little bit. I will try to get a couple more posts up in the next few days. Summer is almost over. :(

We have been very busy traveling about lately so I haven't been good about updating the blog. I don't really feel like covering everything we have done, so let's suffice it to say we spent a week at my parent's and a week at Alicia's parents. We got home on the 1st and my sister, Stacy, came on the 2nd for the 4th of July weekend. It was busy, but fun.

Okay, now on to what you really care about: Parker!
She has been so funny lately. Suddenly in the past month, she has become a real person. She loves to point at things that are interesting to her. 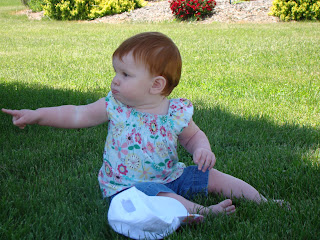 In the last few days the pointing means that she would like to go see the interesting thing or person. She has also started saying, "Whoa!" when something happens. It's hilarious! She has also developed a serious obsession with the outdoors. She loves her slide. 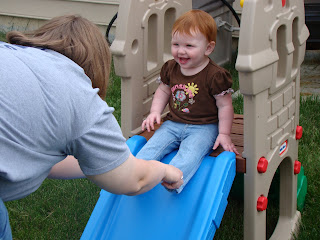 She still has very little interest in crawling, but LOVES to walk. Her m.o. for getting where she wants to is to scoot/slide to the nearest person, stand up and have them walk her to the object. She has actually started walking us to the door then reaching for the doorknob. This is how we ended up outside on the 4th of July. 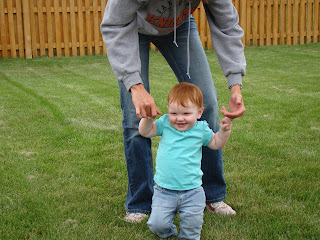 (So, the pictures loaded out of the order I wanted them in. Sidebar: Parker can't get enough swinging. She will swing forever. She actually cries when we take her out. I don't like that part.) 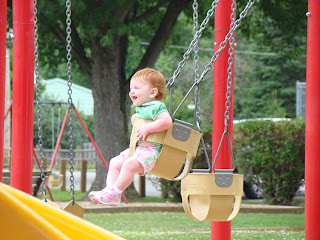 Parker walked her Aunt Stacy to the door and reached for the doorknob. Stacy told her that it was raining and they could only go on the porch. Parker was so insistent on going out further that Stacy took her out so that she could feel the rain. Parker started giggling like a mad baby. Then, I remembered that we had this raincoat and hat, so we dressed her up and out she went. She thought this was the best fun. She walked up and down the driveway for a long time. I think she liked the sound of the rain on the hat! 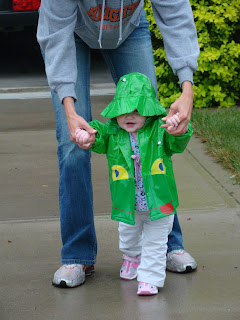 We leave for vacation on Friday so I don't know that I will get another entry in before then. Happy Summer to all!