We stopped by the house this morning so I thought I'd take and post some pics.
So, here it is. 15151 Dry Creek Rd. 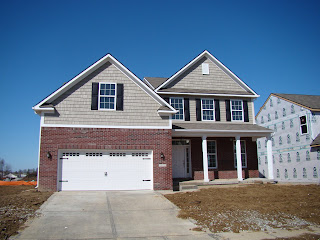 This is the dining room. (The house isn't finished yet, so use your imagination!) 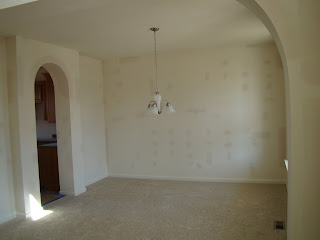 This is the kitchen - the opening you see is to the dining room. There is an island that will go in the center. Obviously, there are no appliances in yet. Alicia is looking in our huge (to us - not anywhere as big as Amy and Ben's!) pantry. 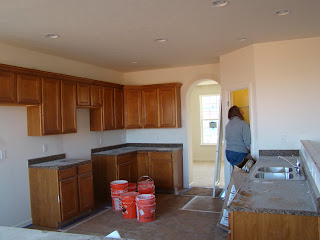 This is our CLOSET!!!!! We will need to put some shelving or something up to make better use of all the space, but it's really big! I'm psyched! 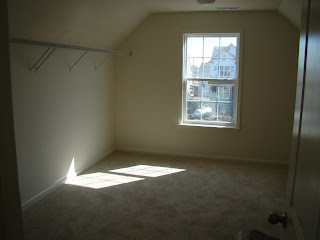 This is the master bath. You can sort of see the whole thing if you look at the reflection in the mirror. The very light area behind the door is a tub. 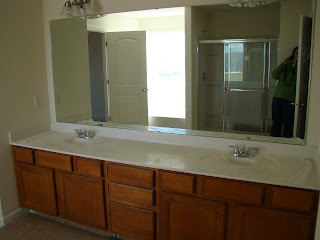 I have other pics but I always think pictures of empty rooms sort of look the same, so you will just have to wait until we move in!
Posted by Suellen at 3:45 PM 7 comments:

I haven't been able to spend as much time with Parker lately as I would like, so I think I am trying to compensate by taking lots of pictures when I am with her. It's not really working, but at least I have some updated pics to post on the blog! I put all of these on P's blog, but I thought you might enjoy them as well.
Here's "little" P hanging with Mr. Bear. 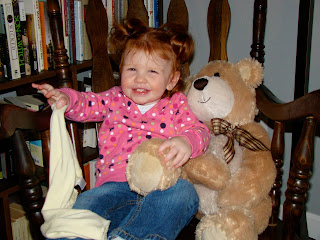 We went to the park for the first time in quite awhile the other day. She looks so much bigger in the swing than she did in October! She has started "swinging" on the big girl swings - well she sits, holds on and I push her VERY slowly - but I haven't gotten a picture because I'm afraid to move to far away for fear that she will lose her balance and fall on her head! My daughter is obsessed with being outside. When it's nice out, she spends almost ever waking minute outside. Luckily, with our deck and fence, I can just toss her in the back yard and let her play. I often go out with her, but if I need to do the dishes or work at the kitchen table, I can still see her. She also likes sitting on ledges. We had a picnic the other day and she wanted to eat her sandwich while sitting on the step between the deck and the house. 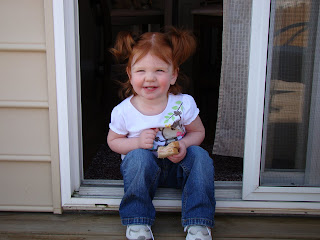 Parker also really enjoys laying on the deck. I don't know why. She's weird. lol I think this is a cute pic - I just wish her hood wasn't in the way! 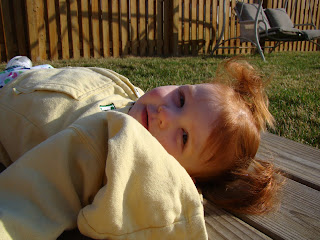 Things have changed quite a bit for the LaMagdeleine- Sharp's in the past week. Last Saturday afternoon we were sitting on our couch relaxing for just a minute after a crazy morning (musical rehearsal, last minute showing, blah blah). Our realtor calls saying that someone is going to put in an offer on our house! Holy Cow!!!!! Ironically it was a couple who came through one time - not the CRAZY people who were allergic to cats and very concerned about the house in that regard who came 3 times (one early on a Sunday morning) but still hadn't made up their minds. Forget you Crazy Cat People! Anyway, we continued with our day and our awesome realtor trucks over to our house at 8:30 that night (since Parker was in bed) so we can look at it. We make a counter offer and are supposed to hear back by 5pm the next day. We don't sleep. Our realtor calls back the next afternoon saying that they have accepted our counter offer, but they need extra time getting a pre-approval because they own rental property. (I don't understand this but our realtor did, so ok.) We are supposed to keep our house "on the market" until we get the pre-approval. I'm secretly hoping that no one wants to see it! :)
Now, we are frantically trying to find a house. We have been looking ALL over. The house we LOVED in Avon (northern Avon, almost Brownsburg) sold. Boo. So, we were starting from scratch. After all the driving to and from University we have been doing lately, we decided that we couldn't move somewhere that was going to make Alicia's drive longer. So, our second choice house (which was south of 36 in Avon) was out. Here's the problem. There are few, if any, houses in our price range, with the things we want in northern Avon, Brownsburg, Zionsville, Carmel and Westfield. We looked at some - but they just weren't right, not big enough, no basement, backing up to major roads, kinda dirty and gross, teeny tiny bedrooms. We were feeling pretty discouraged. So, we decided to expand to Fishers. *Tuesday, our realtor calls to say that we are official because the buyer's pre-approval came through!* We spent Wednesday night driving, almost literally, in circles around Hamilton County looking at houses. Let me tell you - Hamilton County houses are selling quick! No fewer than three times we were literally en route to a house when someone called our realtor to tell her it had been sold. (Hence the circles, since we had to turn around multiple times.) Anyway, we found two houses that we liked, but both were new construction and not finished yet. The one had a model in Avon so we drove from Fishers to Avon to look at the model (please mind that it is now 7:30, Parker normally goes to bed at 7 and we haven't eaten dinner yet). We really like it, but wanted to see the other house as well. Linda (our realtor) says that we will need to make a decision no later than the weekend if we want the houses to still be available. So, I skip rehearsal Thursday and we go looking at houses (AGAIN!).
We look at a random existing house in Carmel and then we go back out to the one we saw a model of. There is no model available for the other home. Alicia and I had talked the night before and decided that we really thought we liked the one that we saw better anyway. So, um, yeah. We decided to buy it. Our realtor got us an AMAZING deal. We totally would not have been able to afford it otherwise.
So, that's the scoop. In less than a week we have sold, found and bought a house. We are closing on our current house on May 5th and on the new one May 6th. So, now I guess I don't have to mop my floor until we move (YEA!) but I also have to pack up ALL our stuff. lol
Oh yeah - the house is in Noblesville, but really more like Fishers. It's HSE schools and is about the same commute for Alicia. We will miss being close to our family and friends, but we will visit and hope you will as well!
Posted by Suellen at 7:33 PM 2 comments:

Parker was so happy that she got to play outside again today. This is definitely a girl who can't wait for summer! 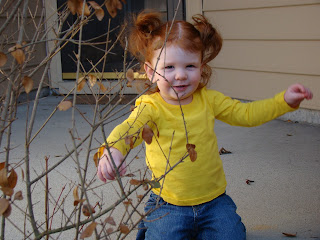