Parker is very lucky to have a handy grandfather. As a belated Easter present, Parker's Grandpa Sharp built her a sandtable. It is currently on our front porch until we have a backyard suitable for human presence. It's not the ideal location, but she thinks it is GREAT! 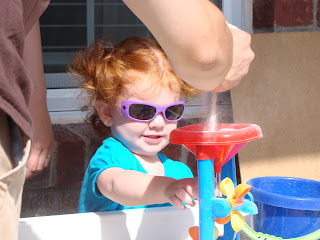 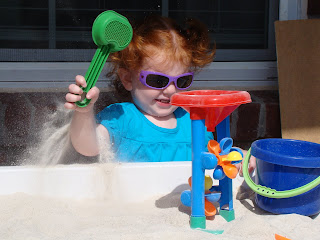 Posted by Suellen at 2:27 PM No comments:

As you know, Parker has a myriad of hilarious faces. Tonight they were even more hilarious because we were eating spaghetti and it was ALL over her face. These pictures do not even do it justice! 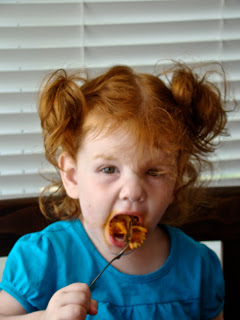 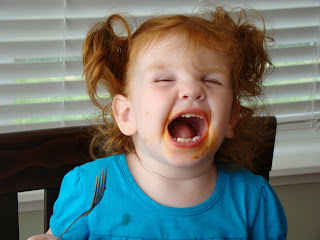 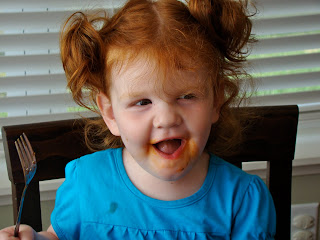 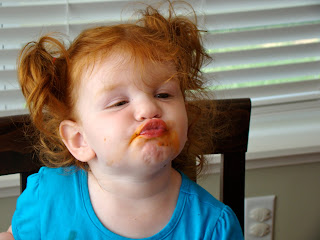 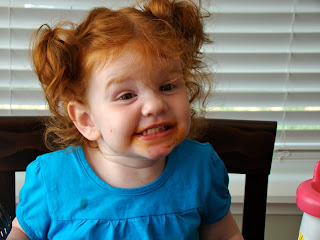 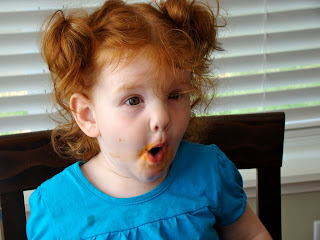 This morning, while I was out, Alicia and Parker built a fort. Apparently, Parker really enjoyed her fort experience because she asked me to build one with her this afternoon. The pillows were her "doors." I have a feeling we are going to be building many forts in the coming years! :) 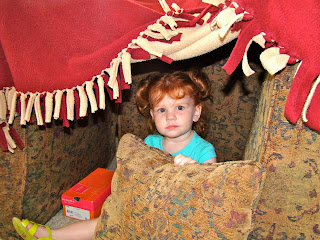 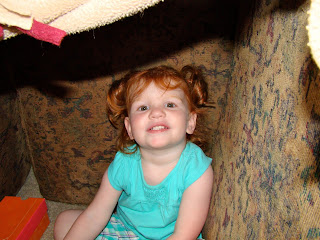 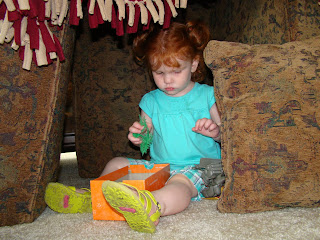 I love this picture of Parker. She's having so much fun! 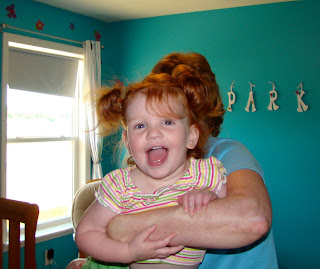 Posted by Suellen at 4:08 PM No comments:

There was a period at the beginning of June when I just didn't get many pics of Parker up. So, here are some overlooked photos.
Parker on the lion at the Children's Museum 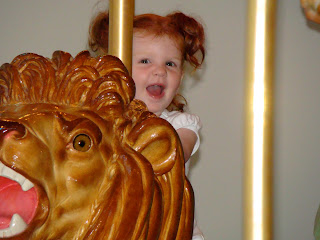 She was so excited that she actually caught a fish with the magnet fishing pole! 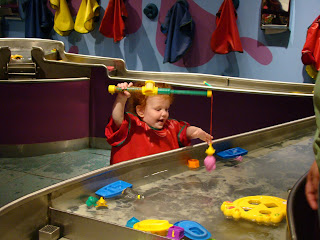 AND, she tried on the dinosaur costume. :) 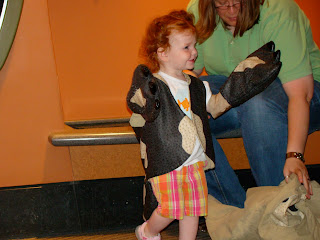 Since, just days before, Parker had requested a little brother, it was fitting that she get a little one-on-one with Liam. 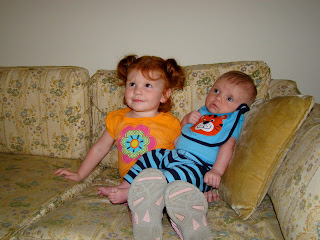 And, lastly, we aquired this chalkboard from some friends and Parker loves it. :) It's definitely an outdoor toy though. She gets chalk EVERYWHERE! 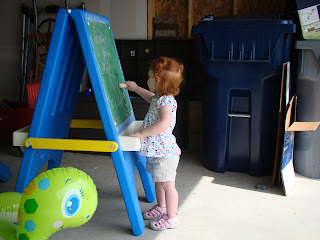 Posted by Suellen at 2:21 PM No comments:

I'm not sure I have much to say, but I haven't blogged in over a week and I have all these friends who are super ambitious and blog every. single. day. Good grief. These women with multiple kids, tons to say, and apparently time to do it in. (I think they must be smuggling extra hours from me or something....)
So, yeah. Here are some notable (and not so notable) things that have happened recently.
*We got most of the downstairs painted (well, my sister and dad did at least)
*I taught a couple of lessons
*We attended 13 graduation parties around the greater Indianapolis area
*I was able to take Parker swimming for the first time this season
*We had dinner with Amy, Ben and kids.
*Parker told me she wanted a baby brother (before Liam visited)
*Alicia gave a kick-butt graduation speech
*Parker had multiple ridiculously adorable moments including:
- saying, "Cute dress, Parker!" after putting on her graduation outfit
- after being told that we couldn't go to Red Robin because it was closed (yeah, we lied), she replied, "Maybe open?"
- while playing a game with Alicia in which one replies the opposite of what the first said (choices being "YEAH!" or "Noooo!"), Parker pauses, looks really thoughtful and then whispers, "Um...What's next?"
*I learned I will be teaching K-6 general music at a regular IPS elementary and, Oh yes, the alternative elementary. Awesome. I'm gonna be great at that.
*Alicia and I went to NYC because Elise was getting an award. We had some good food, got to see Pam, saw a show and mostly bummed around with our wonderful tour guide! lol
That's about it. I can't really think of anything else.
Posted by Suellen at 2:11 PM No comments:

Lately, I have been feeling like Parker is really growing up fast! Both physically and in other ways. Suddenly her 3T shirts are all belly shirts (well, except the "baby doll" style ones, which are naturally long, thank goodness!) I've been trying to get her to stand still to measure her, but she will have none of that!
She routinely speaks in 5 word sentences, will use the pronoun "I" as well as the past tense. She talks non-stop and yesterday played nicely with Bryn and Shay without once running up to Alicia or I.
This morning, she was playing on her little slide and I she looked like a giant, so I dug up a photo from almost exactly a year ago.
What a difference a year makes!
Here is Parker early June 2009 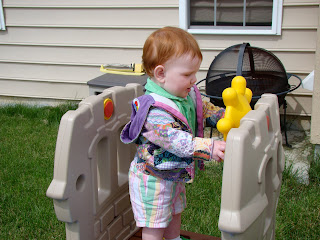 And here she is this morning (note the baby doll style shirt nicely covering her belly!) 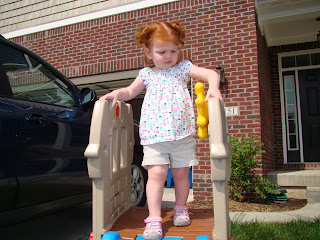 Oh - and it may just be the light, but I think her hair is MUCH redder than it was last year. When did my kid grow up?
Posted by Suellen at 1:19 PM No comments:

We had a painting party this weekend. My sister and my dad are really good painters (Alicia and I - not so much) so my family came down and painted the majority of our downstairs. Here are the before and afters. I'm sure the change would be much more dramatic if we had our curtains or pictures up on the walls or if we were totally unpacked and there wasn't junk still sitting around, but we are getting there.
Kitchen: Before 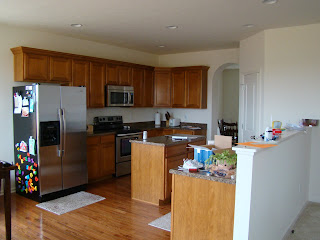 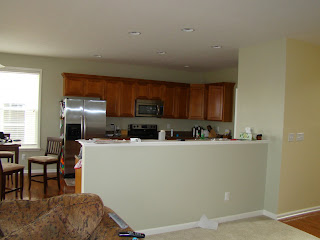 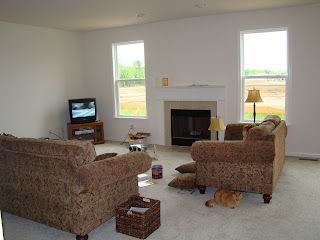 Living Room: After (Note the blinds and ceiling fan!) 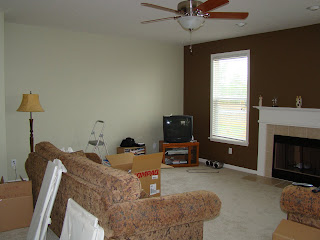 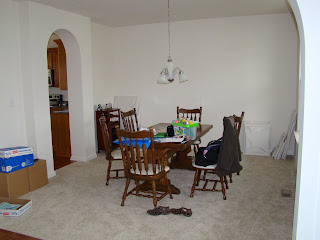 Dining Room: After (It is orange-ish, but peraps not as orange as it appears in this photo. fyi) 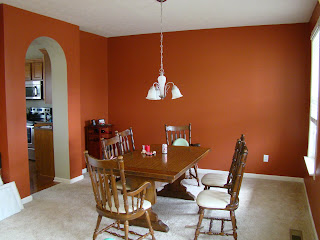 Next stop: Curtains and wall decor
Posted by Suellen at 9:00 AM 1 comment:

My family came down over Memorial Day (mostly to help paint our house, but also for a little fun.) Parker clearly enjoyed herself.
Here she is at Uncle Stuart and Aunt Lauren's playing with Aunt Stacy. 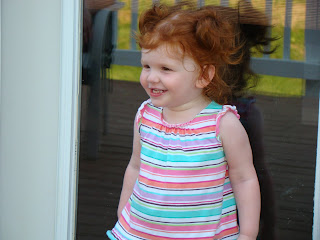 She was very proud of herself for getting the "hillbilly golf" balls on the rack. 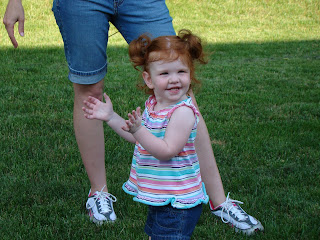 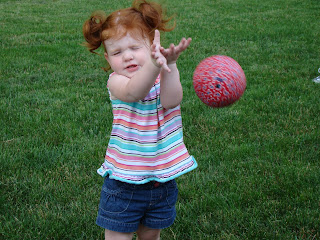 Sprinkler fun in the front yard. 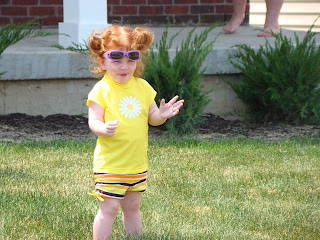 At the park. (I apologize for the belly show - the girl has the world's longest torso!) 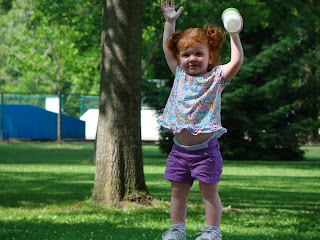 Posted by Suellen at 1:33 PM No comments: