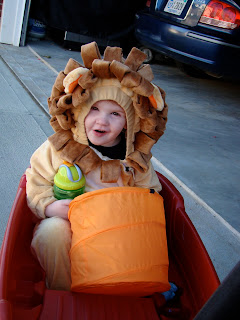 Cuteness at the Zoo

Tonight we were actually able to attend the "Boo" portion of Zoo Boo.  We have been to the zoo 3 times in the past two weeks, but never at the time when the Halloween activities were going on and Parker was so excited to actually wear her costume and, of course, get candy!  She makes a pretty cute little lion, if I do say so myself. 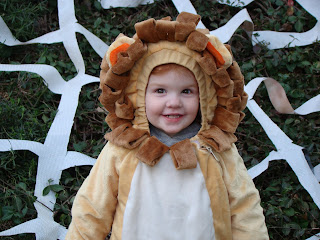 The best part (well second to the candy) of this trip is that she got to see her friends Bryn and Shay.  The girls were far too cute. 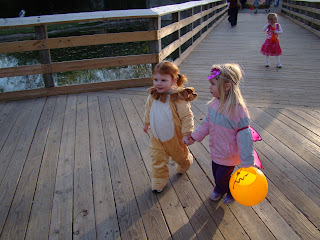 And, we actually managed to pose all the children for a pretty respectable photo. 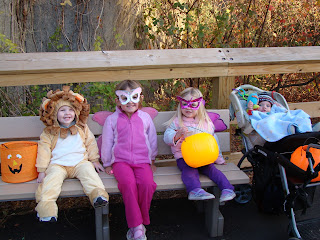 Two butterflies and a (friendly) lion. 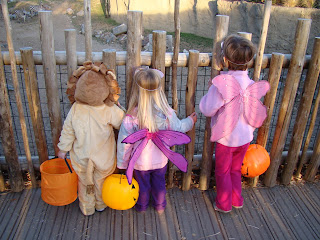 Parker had a great time, but was WIPED out.  Hopefully, she will sleep well and rest up for more fun tomorrow! Happy Fall Break!
Posted by Suellen at 10:14 PM 2 comments:

The Best Kind of Saturday

Today was the best kind of Saturday.  All family - no major things to do.  I've been waiting for this kind of Saturday for a LONG time.  We had gone to the grocery store Friday night, so we didn't even have that on the agenda.
We got up this morning and headed to the Stoney Creek Pumpkin Festival.  It's just a few minute from our house and it was so much fun.  I was unsure how into Parker would be because she is sometimes quite cautious and shy about those kind of things.  Not today!
First, she wanted to ride the "pumpkin train."  Based on past experiences, I thought she would freak out and wind up a crying mess.  Not today!  She was all smiles.  She did want us to walk behind her, but I think it's progress! 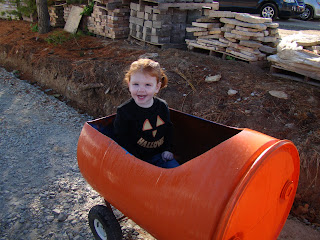 After the train, we explored the grounds and try to take advantage of some photo spots.  Parker was so interested in everything there that she didn't want to look at the camera.  Immediately after this photo Parker spied a blow-up caterpillar that kids could crawl through.  After our success with the train, I thought she might actually do it, but it turns out she just wanted to look at it closer.  We didn't have any tears, she just decided she didn't want to try after closer inspection. 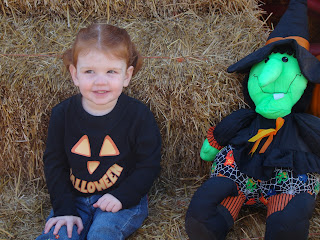 We took a hayride to the pumpkin patch, which Parker loved.  She didn't want to get off!  We searched all around trying to find the right pumpkin for P.  I think she wanted one that was small enough that she could lift it by the stem.  We finally found one and she clutched it all the way back.  (She was also fascinated by the tractor pulling the wagon, which is what she's staring at in this photo.) 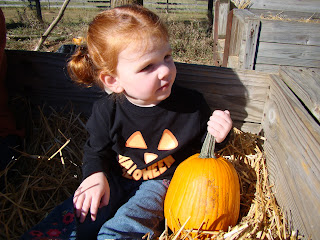 Alicia took the pumpkins to the car and Parker and I explored the farm.  Parker claimed that she really wanted to go on the "trampoline" (the bouncy pillow) but we didn't think that she would actually be able to navigate getting on the pillow by herself since it was REALLY busy by this time.  So, we distracted her with making a candle.  Basically, you had to take this pre-cut piece of wax and roll it around a wick. The woman got it started and then Parker finished all by herself! (Again, shocking because she had to interact with a person she didn't know!)

We did a little more exploring, took some silly pictures... 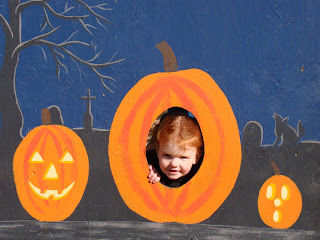 Watched the ducks on the pond (and the zip line above) ate a funnel cake, got a butterfly balloon and went home! 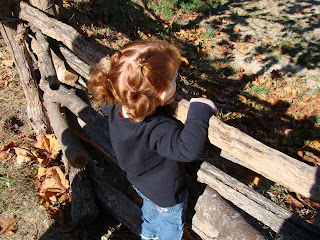 Parker took a 2 1/2 hour nap when we got home! :)  We played the rest of the afternoon at home (which Parker rarely gets to do).  Around 5, we decided we wanted some carmel apples, so we took a quick drive up the road to an orchard and got some with some cider.
It was really great to just spend some time as a family without running errands or doing schoolwork.  Here's hoping we get more Saturdays like this in the future!
Posted by Suellen at 9:40 AM 1 comment:

As mentioned in my previous post, Parker was being a pain during her 2 year photo shoot.  While this didn't leave us as many "pretty" shots as normal, it did leave us many shots that show Parker's true character! Here are my favorite "real life" shots of P! 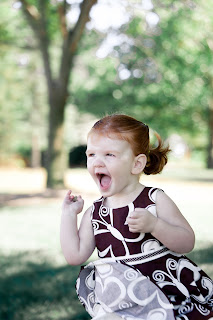 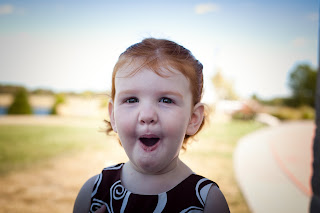 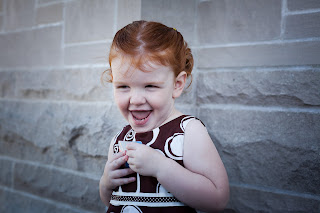 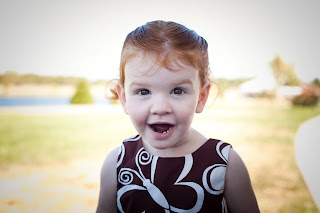 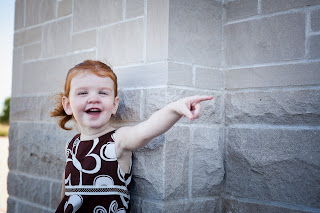 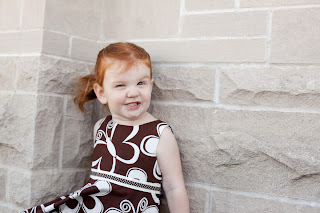 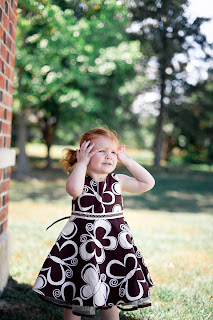 The wind actually did this by itself!  Hilarious! 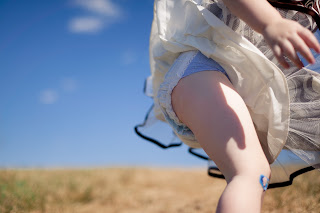 We had our friend and amazing photographer, Micah Bell, do Parker's 2 year photos at Coxhall Gardens in Carmel.  Parker was being quite the pain.  She refused to willingly look directly at Micah.  In fact, he was often literally chasing her around and has quite a few shots of her back, I'm sure.  He did manage to get a few good ones though.  Here are my favorite "good" shots. 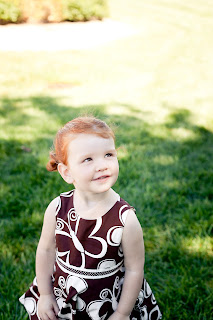 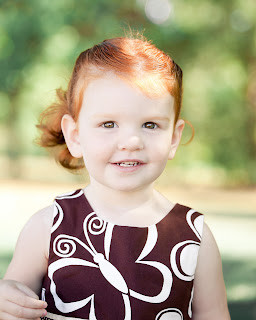 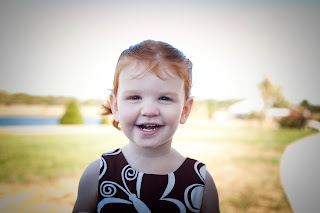 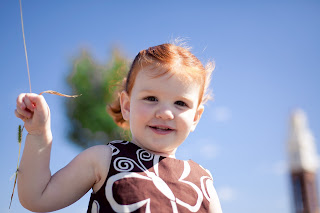 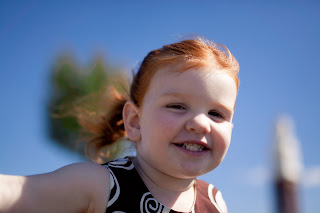 Posted by Suellen at 8:35 PM No comments:

This weekend, Parker and I left Alicia at home and went to visit my sister Sally at college.  We stopped at my other sister, Stacy's, before heading to Baldwin Wallace on Saturday.  Here are Stacy and Parker outside Stacy's house before we left Saturday morning. 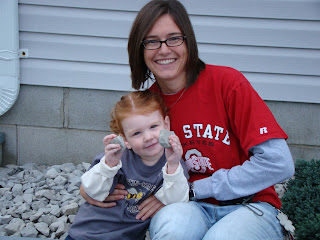 Although, Parker really loved watching the band at Sally's football game, that was about the only part she really liked.  It was rainy and gross, so she had to sit under an umbrella and after half-time we decided to call it quits and head back to the hotel.  Clearly, Parker thought that was a much better idea. 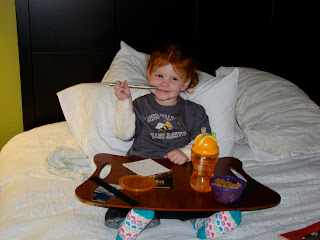 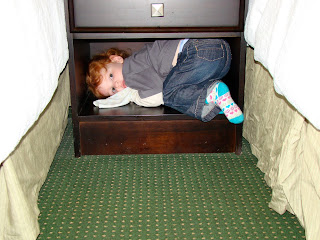 This morning, Sally took us on a campus tour before we had to leave.  Parker particularly enjoyed the music building and pointed out EVERY piano in EVERY practice room.  She also really enjoyed the instrument lockers and was so excited when she found this empty one. 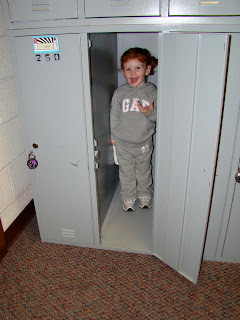 It was great weekend and flying solo with Parker on the road wasn't nearly as hard as I thought I might be.  I guess P is growing up.
Posted by Suellen at 10:20 PM No comments: