This past weekend we traveled to Northern Indiana to visit with Alicia's family and to attend a friend's baby shower on Sunday.  Parker always has fun with her Grandparents.  Yes, that's a band aid on her face.  Apparently, the new blogger thing actually loads picture in the order you choose them, so these pictures are all backwards from the way I wanted them.  So, just work with me.  More about the band-aid in a minute. 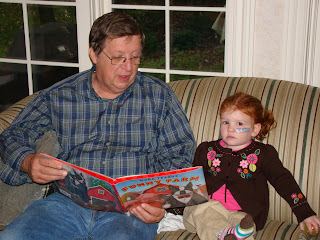 On Saturday, Parker was playing hide and seek in Grandpa's closet.  The first time I followed her in to make sure there wasn't anything she shouldn't be getting into.  I didn't see anything, so I left.  The game was that I would peek out from the door to the room and she would run into the closet and hide in the shirts.  Then, she would sneak out, see me and do the same thing over again.  The 4th or 5th time she ran back in, I hear a giant thump.  P came out and said, "I hit my head."  So, I gave it a kiss and she ran back in.  The next time she came out, her face was dripping blood.  Oh.  Ok.  So, whatever she hit gave her a nice gash under her left eye.
So, we watched some Sesame Street with an icepack. 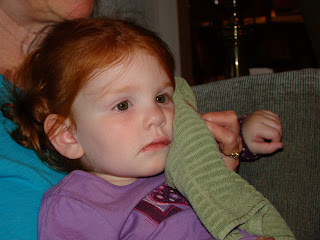 Alicia's parents had acquired this game, "Elefun."  Basically, there are about 30 butterflies that you stick in this elephant, turn on the game and it blows them into the air.  The object is to catch the most butterflies.  Parker's version pretty much included laughing while all the butterflies flew out and then picking them up off the floor.  However, after consultation of the rules, we learned that this IS legal. ;) 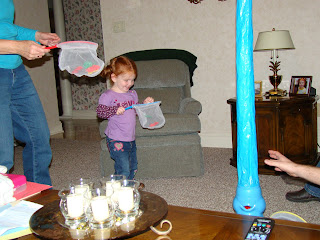 And this is just a picture that I think makes Parker look like she's about 4.  Seriously, when did she get so big and long? 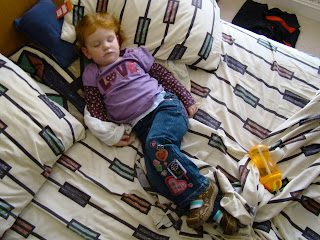 Posted by Suellen at 9:34 PM No comments:

Whew. We have had a really busy weekend. During the day Friday, while we were all at school, Alicia's dad came down and started attacking our weed-field of a backyard. After we got home from school, we pretty much had time to go to dinner and come home and go to bed. Saturday, Alicia and her dad worked on the yard all day. Parker and I worked on going through her closet (getting rid of the too-small clothes, hanging up the new ones.) Parker took her nap and I got 1 coat of clear finish on 1 of the bookshelves. (Slow and steady wins the race on this project, I guess.) Parker woke up and I actually got to spend a bit of time with her, reading LOTS of books. The yard project finally finished and Parker got to play a little with her Grandpa Booga before going to bed. I continued to clean and organize P's room.
Today, we got up and ran to Target. They finally had the cube organizer that we had been eyeing for P's room on sale. So, we went out to get it! We also got Parker's Halloween costume and a winter coat for her. When we got home, we assembled the cube and P took a nap. Unfortunately this was rather short-lived so when Parker got up, we worked on moving all the stuff from the floor and the changing table into the cubes. (This is all part of our grand-plan to get the baby stuff out of Parker's room!) By the time we finished, it was time to get ready to go. Alicia and I actually got to go on a DATE! (What? A date you say? Yes. A real-childless-wine-at-dinner-fancy-restaurant-date!) We took P to a friend's house for babysitting and enjoyed a Parker-less couple of hours.
We got home a bit past her bed-time, but I don't think she was too much worse for the wear. We should do that more often.
So, that's that. A relatively unexciting, but productive weekend. Too bad the weeks aren't as great.
Posted by Suellen at 10:03 PM 1 comment:

Parker had her 2 year appointment today.
Here is what we learned.
She weighs 29 lbs, 3 oz. (75th percentile)
She is 36 inches tall (95th percentile)
She is developmentally on or ahead of schedule and.....
She has double ear infections. WHAT?
She hasn't been acting obscenely cranky or messing with her ears and her snottiness had mostly gone away. I feel like a horrible parent, but how the heck am I supposed to know when she acts normally and doesn't run a fever or anything? Sheesh.
Anyway. Our kid is mostly doing well. So, that's good. Hopefully, the amoxicillin will do it's stuff and kick these infections!
Posted by Suellen at 8:04 PM 3 comments: 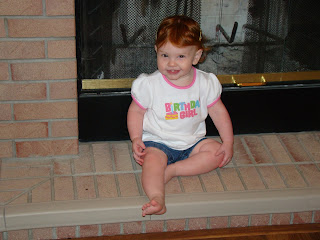 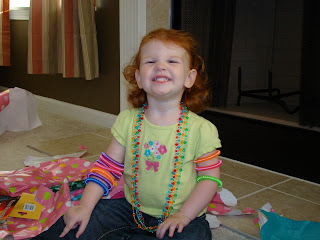 We've been a little MIA from the blogging world lately. Things have been busy with the start of school and getting ready for Parker's party. The party was a success and Parker had a good time. I think she was mostly excited to eat cake. Every time I would ask her what she wanted for her birthday, she would reply, "CAKE!" A girl after my own heart!
Here is the almost Birthday Girl right before her party. 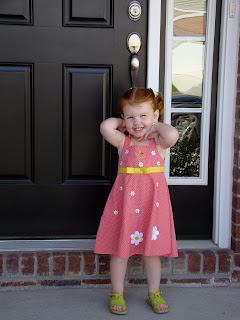 Here she is "riding" her new tricycle. 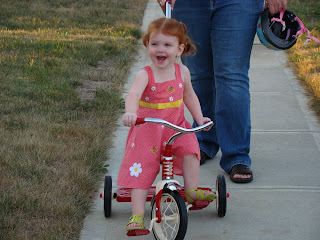 Oh and did I mention that amidst the party weekend, my father (with the help of my brothers) built us these bookshelves? Craziness? Yes. But at least we have somewhere to put our (okay, Alicia's) books! 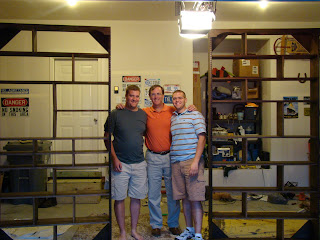 Posted by Suellen at 9:34 PM No comments: