Does anyone remember two summers ago when Kitty Maxx chased Kitty Finn onto our plant shelf, forcing her to fall and tear her ACL? One very expensive surgery and then a couple of weeks of horrible recovery later, the kitty was better. YEA!

A couple weeks ago, we noticed Finn limping a little. It seemed to come and go. We were super busy, so it took us a few days to get her into the vet. The vet (not our usual vet, some 12 year old who I don't really trust....am I getting old and biased against young professionals? That's another post. I digress.) said it was probably her knee cap coming loose and her having to walk weird to put it back in place (or something like that.) She said, many times, these things can fix themselves. She gave us some pain meds and told us to call when it was gone if Finn wasn't doing any better.

It didn't get any better. So, we called and Alicia took her in yesterday morning. They had to do x-rays and remove this mass from her paw, which they discovered at the first visit. I picked her up in the evening (with a very fussy Parker - fun times) at which time I was told that Kitty Finn has torn her other ACL. WTF? When she tore the first one, we were told that it was extremely rare for cats to do this. We assumed it was the giant twisting fall that she took. Since then, she has barely been able to jump on the couch, let alone get up to the plant shelf. I have no idea how it happened.

Okay, so I start thinking, aside from the giant expense, we can do this next week during our spring break, the recovery will be easier to deal with when we are not in school. It involves multiple drugs being given at all times of the day and night. It's actually worse than having a newborn, so it's a good thing we will be on break.

Wait. The doctor who does these surgeries is out of town next week. Fantastic, so now the surgery will have to be the week we get back from spring break - right when we won't be home at all. I have no idea how we are going to manage all this. My sister will be here that week and then Alicia's mom might be coming the week after, which would be very good. We will need the extra help.

Oh - and did I mention that Finn ripped out all the stitches from her paw overnight? She's back at the vet this morning.

Sigh.
Posted by Suellen at 8:55 AM No comments:

I need to play the horn for a wedding this weekend. I just started playing today. I haven't played since May (and let's be real, I'm not good to begin with!) I've been playing on and off for about 40 minutes and my lips are soooo swollen and my cheek muscles are killing me. This does not bode well. I hope Brian doesn't read this.......
Posted by Suellen at 10:30 AM 1 comment:

What was I thinking?

I'm not sure why I didn't realize that directing a musical would involve nightly rehearsals.  I've done this before.  Now, I won't get to see my baby in April.  Don't get me wrong.  It's fun.  I like it, but when am I going to see Parker?  Ergh.
Posted by Suellen at 9:52 PM 5 comments:

I'm not quite sure why I feel the need to post Parker's "stats" on my blog, but I do so here goes:

All of these are in the 97th percentile or above. Apparently, she fits in quite well with her friends Sadie and Emily! :)

We also talked to the doctor about Parker's lack of rolling over. She said that Parker is sitting better than most 9 month olds, so there is no need to be worried. She basically said that if P. can do the more advanced skill, then it's fine. Phew.

Oh- and apparently that yukky rash is eczema (how DO you spell that?) so we have some cream to put on it.

We are getting portraits taken on Saturday. I'm pretty excited to see how they turn out. I'm sure there will be more posts on that to come!

Fun in the Sun

Today was an absolutely gorgeous day! Since Parker was born in September, she hasn't gotten to spend much time outside. I think she has gone to the park a couple times with her Aunt Lauren, but she has never gone with us. So, today we went to the park! Parker liked swinging. I think she would have liked the slide better, but we had an unfortunate incident in which P. tipped over (the surface was sloped) and bumped her head on the curvy slide. (The big kids were using the straight slide!) She got over it and seemed to have a good time anyway! It was nice to spend some time outside and when we got home, we played a little in the backyard while Mom made dinner on the grill! Spring is coming!!!!!!!! Here our some pics from our adventures today. 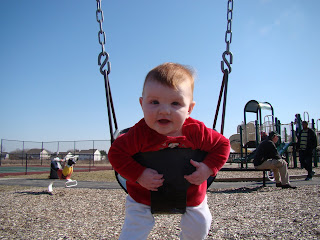 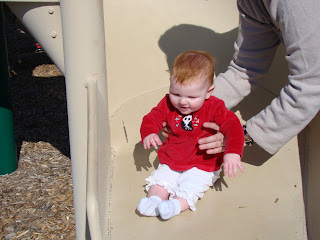 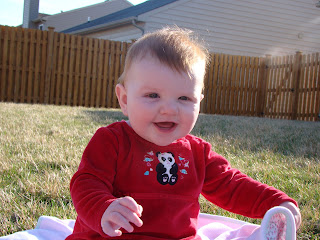 1. When I look to the left, I see my desk, a blank cinderblock wall, some broken instruments and a broken bookshelf. My work environment is awesome.

2. I guess the living room is the room that has the best view in my home. All the other windows in our house look out to the street - the living room looks into our backyard (fenced, thank goodness so that we don't have to look at our neighbors' crap.)

3. Let it work itself out. I'm referring to Parker's bizarre pattern of sleep recently. I'm hoping it has to do with this cold she has now.

4. If it is done dirt cheap, then you probably got your money's worth. I'm a big believer in the "you get what you pay for" theory.

5. Supporting kids is a responsibility that all qualified citizens must share. Most of my kids have sorry excuses for parents and so, sadly, that makes it the responsibility of the other "qualified" adults in their lives to take care of them, get them to school, keep them off the street and, maybe someday, help them become a functioning part of society. What's even more sad is that I may be the only "qualified" and willing adult that most of them see in a day.

6. If you have any advice on what to do with a sick baby, feel free to share. Parker has her first real cold and I feel so bad for her!

7. And as for the weekend, tonight I'm looking forward to "Friday Surprise" (although it's not much of a surprise anymore), tomorrow my plans include room service, the Museum of Contemporary Art and lunch and Sunday, I want to spend time with my family and perhaps buy Parker some clothes that will actually fit her. We are certainly doing our share to stimulate the economy this weekend!
Posted by Suellen at 12:10 PM 1 comment:

I just got a text message from Lauren, my sister-in-law/babysitter, saying that Parker rolled over! Finally! (Front to back and, no, she hasn't done it again.) I'm really happy that she finally reached this milestone because I was getting a little worried. But, now I'm sad that I missed it. It's not like I was doing anything important. I'm just sitting at work in my 2 1/2 prep time pretending like I'm doing things.

Lately, I've been feeling like all I do is leave my baby with other people. Last night I saw her for 45 minutes before I had to leave again. That's not enough. I am praying so hard that this job share goes through because I cannot do this much longer. Sadly, I think it's going to be worse before it gets better. I know that, inevitably, I will miss some things, but I don't even feel like I'm missing them for a good reason right now.

Ergh. Maybe she will do it again for me tonight.
Posted by Suellen at 1:32 PM No comments:

Let me tell you about my Kitty Maxx. 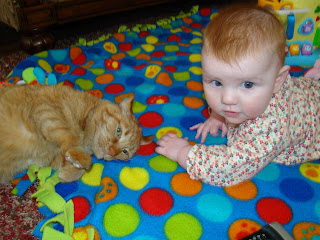 We are best friends. 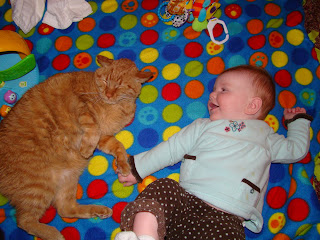 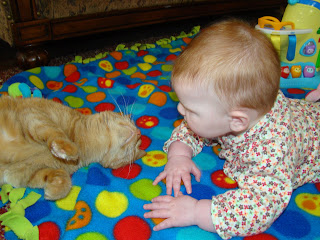 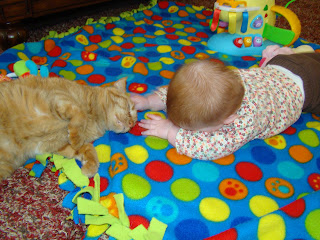 And sometimes, he lets me EAT him! He's the best! 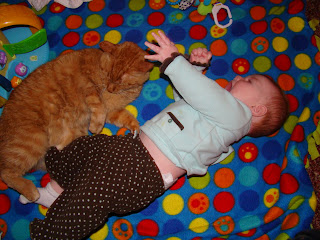 Where did my daughter spend a good portion of her night last night? - Sleeping in the middle of the living room floor.

Why? - For the last4 nights Parker has been a horrible mess. She has been waking up anywhere between 3 and 8 times a night. Generally, before 2:00, you can soothe her back to sleep by rubbing her belly. Once you hit the witching hour - she is up and will not sleep ANYWHERE except on one of her moms. This has made for a week of virtually no sleep for Alicia and I. It's much worse than when she was little. Heck, she's been sleeping through the night pretty consistenly since she was 6 weeks old! It really has not been affecting Parker at all. She is perfectly happy during the day, but at night, her evil twin returns.

We have tried lots of things.

Letting her cry - Completely ineffective with Parker and rips my heart out, so we are aren't doing that again. Additionally, the one time we tried it, when I finally went in to get her, she had taken the world's largest poop. Great. I felt like a wonderful mom.

Not picking her up, just "soothing" her while she is in the crib - This sometimes works, but not if she's crying. She will just keep on crying until you pick her up. Sometimes she will even keep crying past that if she has been going long enough. If she's not crying and you don't want her to actually wake up, you had better get in there FAST because her flailing body parts are going to wake her up soon!

Sleeping in the swing - She won't have it.

So, how does Parker end up sleeping in the middle of the floor? - Finally last night I resolved to NOT let her sleep on me. So, I layed her on the floor and sort of hovered over her, holding down all of her limbs (this sounds much more torturous than it was) and tried to soothe her to sleep. FINALLY, the baby fell asleep! YEA! But here she was in the middle of the living room. Who cares? I moved the monitor and went to bed. She loved waking up looking at the ceiling fan and having her "Brightlings" within grabbing distance.

Are there more nights on the floor in her future? I don't know, but if it means I can sleep a little, that's fine.
Posted by Suellen at 8:58 AM 4 comments: