I think by now everyone knows how crazy Parker's hair is, but this morning took the cake! It seriously looked like she was wearing a wig! Some 75 year old woman would pay good money for this 'do.
Here is the back shot. 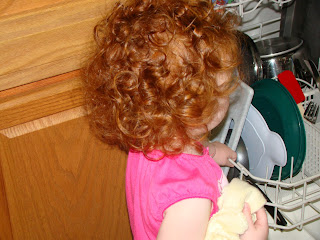 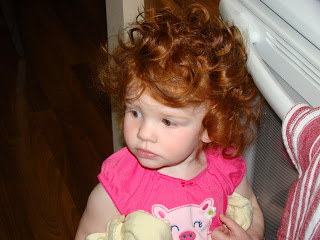 Aaaaannnndd....Right Profile. Please, just look at how small her head looks in comparison to her HAIR!!!!!!!! 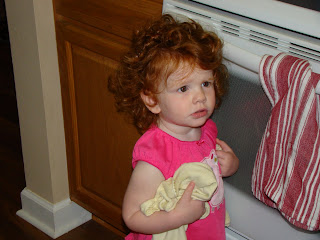 That is all. Goodnight.
Posted by Suellen at 9:33 PM 3 comments:

For the last few days, I have really been trying hard to keep a positive outlook on life. It's not that I'm unhappy, it's just that I have so much going on and am really stressed out. When that happens I tend to get harshly sarcastic, merely as a coping mechanism. I've been consciously thinking about not doing that. It's been working pretty well.
However, what is dragging me down today is my ability to be a good parent to Parker right now. She isn't 100% healthy. We aren't entirely sure what is going on, but I know that she isn't feeling her best. All she wants to do is be with me; play with me, cuddle with me. Heck, she even wants to come to the bathroom with me. And she just can't. I have to go to work, I have to go to rehearsal. I feel like I'm letting her down. As she is falling asleep and I'm rubbing her back, she will cough and make this little sad, "Mommy." Then when I tell her it's time to go to sleep and I will see her in the morning she gets upset but tries to be so strong. She will start whimpering trying not to cry and choke out, "Okay. Love you much." Breaks my heart. During the week, I don't get to put her to bed and Alicia says that she will randomly start crying and asking for me. All I want to do is hold her all night long so that she can sleep better. I want to read books with her and chase her on the playground and be silly with her. But I can't. Not right now. The best I can do is tell her I love her and make sure she is with people she loves who can do those things with her.
I love what I'm doing with the musical, but I miss my own baby. I CANNOT wait until May 2nd.
Posted by Suellen at 9:16 PM 1 comment:

In three weeks, we will be moved and I will only have to make it through a Kindergarten program and the last few weeks of school.
In two weeks, the musical will almost over. The hard part will be over at least and we will only have 2 performances left.
In one week, the primary program will be over! YEA! This is the most stressful thing for me, right now. I'm sure that when it's done whatever is next on the list will move right on up. :)
Today, the Intermediate program is over, rehearsal and lesson were canceled AND Parker has decided to sleep in so I was able to get all my homework for the week done. Based solely on the sounds coming from her room, I think she is feeling better today, so I am hopeful that I will be able to get the house on the way to being clean and maybe, just maybe, we can do something together as a family tonight.
It's amazing what a little productivity can do for a girl's spirits!
Here's to having a good day!
Posted by Suellen at 9:14 AM 4 comments: 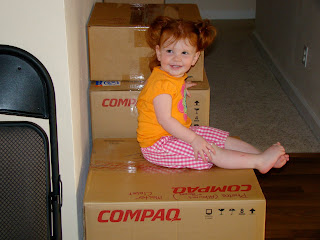 Hair Cut and other SB '10 Adventures

We have been on Spring Break this week. It has been nice to be at home, spend some time together as a family and just get a little caught up in preparation for the coming crazy weeks. We started Monday by taking Parker to get her first hair-cut. We weren't looking to make it short - just even in out a little as it has been a little mullet-like lately. (And those piggies have been OUT OF CONTROL). So, here's a before. 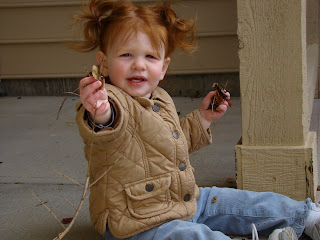 And here's a not so good after. P's hair can be worn down with barrettes now, although if she's doing any sort of playing it gets kind of crazy. Additionally, Parker hates "ball-ettes" (barettes). We tried it the day after the haircut, but it was a battle all day long. 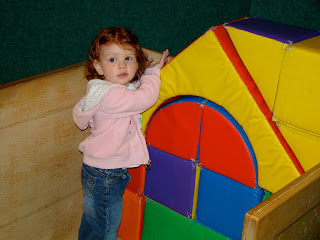 Today we spent lots of time outside since it was so nice out! I've been finding it increasingly more difficult to get a shot of Parker's face, so these pics aren't great, but it's all I've got! Here is Parker on the big girl swing. 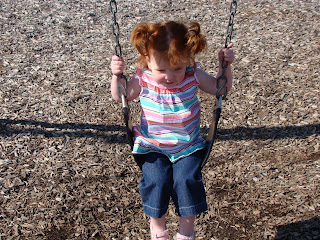 Parker wanted to play on the tennis court. Alicia asked her if she could walk on the white lines. It was super cute to watch her following Alicia around the lines. 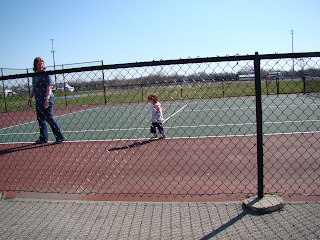 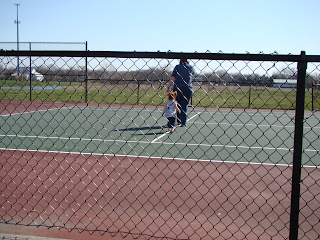 P has a funny look on her face here, but she is "pinning" (spinning). I love her little foot! 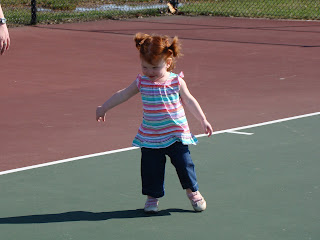 And here is the embodiment of Parker lately. Little Miss Sass with her hand on her hip. We're in trouble come the teenage years! (Really, she's a good girl, but she is a little sassy!) 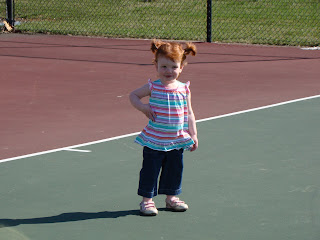 Break is almost over. :( But, summer will be here soon!
Posted by Suellen at 9:18 PM No comments: