My 2 1/2 month old has everyone wrapped around her little finger and she knows it. I really didn't think that babies so little could manipulate, but Parker certainly can and does. Here are two prime examples.

Last weekend, my sister was visiting and was entertaing Parker by dancing. Parker thought this was the most hilarious thing ever - she was almost laughing. Sally danced for a good 20 minutes to Parker's amusement and then told P that she had to go write her paper. Parker immediately made a ridiculous pouty face. (If you haven't seen my daughter's pouty face -it's insane. She sticks her lower lip out so far and wrinkles her forehead. I laugh everytime.) I thought this was just a random occurance - until today.

I was in the computer room trying to dig a path through the Christmas presents and Alicia was entertaining Parker in the study. Alicia calls me in to watch Parker. Parker is lying on her blanket and Alicia is leaning from the ottoman so that her face is above Parker's. Whenever Alicia pulled her face back in an attempt to begin grading again, Parker made her pouty face. This happened EVERY time Alicia pulled away and began to not pay attention to Parker. Sheesh! The poor baby looks so pathetic with her pouty face on that I gave up my project and played with her so her other mom could get some grading done. I guess the pouty face worked! :) Smart baby.

Lastly, some quick cuteness. The hat is actually a snowman head (complete with hat, which you can't really see since it's black.) One of the parents at Alicia's school really likes to knit baby hats. We have 3 already! 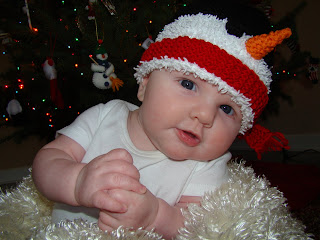 OMG, that hat is too cute on her!

I think Brett must have called Parker and told her about the pouty face. Brett does the most dramatic pout I've ever seen. I swear it's out of a cartoon. I've always wanted to get a picture of it, but internally I feel bad because I'd be a bad mom for taking a picture of my child in distress.

That picture is TOO CUTE!

Carrie- Seriously! He must have called because Parker's is super dramatic too. I laugh every time!

Sign me up for one of those hats! Too, too cute! Sadie is pretty darn good at the pouty face too!